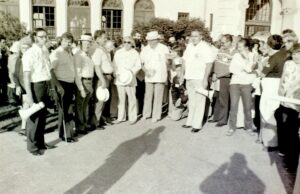 The purpose of the 40th Anniversary Oral History Project was to capture, preserve, and make available stories and reminiscences from society members and Bay View residents that otherwise might be lost over time. In 2019, volunteers with the BVHS Archives Committee conducted interviews with nine current and former Bay View residents. These interviews were combined with newly digitized interviews and other audio recordings from the 1970s and 1980s. Combined, these interviews and recordings offer a range of historical perspectives on how Bay View has changed over time. They also provide the foundational collection for an ongoing oral history initiative that will continue to document the neighborhood and its people as time and resources allow.

A selection of interviews and recordings are listed below. Clicking on a link will bring you to that interview recording in the oral history playlist on BVHS’s YouTube channel. Interview indexes and/or transcripts will be added to this page and the recordings as they become available. Similarly, new interview content will be published to both locations as the legacy recordings are processed and new interviews are gathered. If you are interested in assisting with the BVHS oral histories (interviewing, transcribing, indexing, etc.), please contact Kathy Mulvey (414-744-0408) or Brad Wiles (bradleywiles1@gmail.com).

The legacy items consist of various interviews recorded and compiled in the 1980s and 1990s (mostly by John Steiner and Ray Bethke), as well as speeches, readings, meeting proceedings, and other narratives relevant to Bay View history and the BVHS. A few notable items include:

In addition to the audio interviews, speeches, and other recordings, the BVHS has several miscellaneous transcripts and texts based on interviews and written memoirs including: